Elisenda Bou-Balust is CoFounder and CTO of Vilynx -an AI company revolutionizing how machines understand and learn by themselves- and Associate Professor at UPC. In Vilynx, Elisenda leads a team of more than 40 PhDs and MsCs in Computer Vision, Deep Learning and Artificial Intelligence, to build the first self-learning AI brain. Elisenda specializes in Aritficial Intelligence, Satellites and Complex Distributed Systems. She has cooperated with University of Maryland, MIT, NASA and Google on Autonomous Satellite Missions.

I love to work with amazing people and try to push the boundaries of technology and science with them. I have always been passionate about crafting ideas and changing the world and I am lucky to call this my full-time occupation. Reach me to talk about Complex Systems, AI, Knowledge Graphs/Ontologies and Deep Learning. Especially if you are interested in Emergence and Reasoning!

Bou’s PhD was conducted on several research lines on Machine Learning, Distributed Task Scheduling, Nano-Satellite Constellations and Wireless Energy Transfer. Bou was also Lead SW Architect at UPC Nano-Satellite Lab (2012-2017) and collaborates with the MIT Aeronautics and Astronautics Department and the UMD Aerospace Engineering Department. She has been lecturing on Nano-satellites at UPC (Capstone Project, CDIO Initiative) since 2013 and was a recipient of the 2013 Google Faculty Research Awards on phone-based nano-satellite constellations. Since 2012, Elisenda has advised more than 12 Msc thesis, participated in several national and international research projects (NASA, DARPA, EU H2020 amongst others) and given invited talks in Asia, EU and US universities on Wireless Power Transfer, Artificial Intelligence, Machine Learning, Satellite Software Architecture and Entrepreneurship. She participated in a NASA Centennial Challenge at age 18 and, started cooperating with MIT at age 19.

With a strong interest in Software Development, AI and startups, Bou is also Co-Founder of EstimTrack (ML algorithms to optimize patient flow in hospitals) and advises high-tech startups/spinoffs. She also holds several patents on the fields of Machine Learning applied to Machine Learning, Video Processing and audience analytics.

Elisenda Bou-Balust has founded 3 startups with national and international presence: in Barcelona (Spain) and Palo Alto (California, US).  She currently is CTO at Vilynx, Inc, where she is building the first self-learning AI brain. In Vilynx, she oversees the engineering and technology departments to apply machine learning and deep learning at scale.  Vilynx has customers in media organizations worldwide and is currently serving 4B videos generated with AI a month.

Elisenda Bou-Balust received the M.Sc. in telecommunications engineering from UPC BarcelonaTech in 2010 and her M.Sc. in electronic engineering from ULPGC in 2011 and her PhD in electronic engineering from UPC in 2017. From 2007 to present, she has been conducting research on resonant inductive coupling wireless power transfer, scalable software architectures for fractionated spacecraft and autonomous systems (ML and distributed task scheduling). In 2008 and 2009 she carried out two stages at Massachusetts Institute of Technology where she worked on the analysis and modelling of distributed systems for aerospace applications. From 2012-2017 she was a PhD Candidate with the Power Electronics Group in Technical University of Catalonia and participated in several international (NASA, EUH2020) and national (CDTI) research projects.

Bou-Balust was a recipient of two Vodafone Scholarships (2008 and 2009), a research grant issued by Thales Alenia Space Spain (2012-2016) in wireless energy transfer for satellite constellations and a Google Faculty Research Award (2013). Bou-Balust lectures on nano-satellites at UPC since 2013 where she has advised more than 15 MsC students and leads SW Architecture at UPC Nano-Satellite Lab. She also collaborates with the Aerospace Engineering Department at University of Maryland and Aeronautics and Astronautics Department at Massachusetts Institute of Technology on Space Applications of Resonant Inductive Coupling. She serves as a reviewer for the IEEE Transactions on Industry Applications, IEEE International Midwest Symposium on Circuits and Systems, IEEE Transactions on Instrumentation and Measurement, IEEE Transactions on Signal Processing, and IEEE Transactions on Communications. She also co-organized sessions related to wireless energy transfer at at IEEE ISCAS (2013,2014,2015) and PIERS (2013,2014,2015,2016). 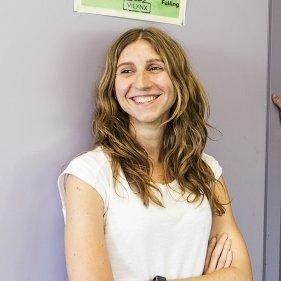